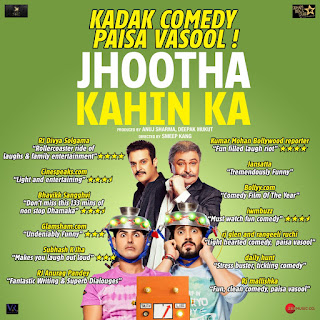 In search of laughter therapy? then go watch ‘Jhootha Kahin Ka’. The film carries all the perfect ingredients to make any person laugh out loud. The Punjabi hit film maker Smeep Kang has certainly succeeded in creating brand for himself with ‘Jhootha Kahin Ka'.
The movie revolves around two buddies who set the chain of lies creating lots of chaos among the characters. Rishi Kapoor plays Omkar's father who turns up from village to surprise him and is in turn surprised by his son's lifestyle.
Jimmy Sheirgill  plays the elder brother of Sunny Singh who faces some serious issues for his name 'Tommy', usually ends up with euphoric dialogues. Actor Manoj Joshi, the suspicious character will drive you crazy with his comical dialogues and timing. The confusion built throughout the movie is lit. The movie holds several funny moments, mind-blowing situations, rib-tickling jokes, fabulous editing, says the critics.
After watching  Jhootha Kahin Ka, comedian Sunil Grover said, “I just watched the movie, it was awesome, everybody has  fantastically played their role. People must go and watch this film”. Similarly, ‘Grand Masti’ director Indra Kumar quoted, “It’s a very funny film, everybody is playing their part very well”. Whereas, the popular RJ Anurag Pandey complemented the movie stating “Jhoot nahi bolunga… what an amazing watch! The movie holds lots of lies and confusion in it. It’s a clean comedy and will keep you entertaining till the end.
Jhootha Kahin Ka, directed by Smeep Kang is full of comedy. The movie stars actors Rishi Kapoor, Sunny Singh, Omkar Kapoor, Jimmy Sheirgill, Lillete Dubey, Manoj Joshi and many more.
'Jhootha Kahin Ka' is produced by Anuj Sharma and Deepak Mukut under the banner of Shantketan Entertainment and presented by Soham Rockstars Entertainment. The film has released worldwide and has been receiving lots of love  from both the audience and the critics
By Santosh Sahu
Share to: