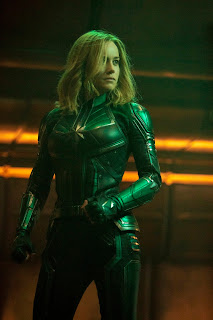 “I loved India!" From loving India and Indian food especially pickle, the mighty Brie Larson aka Captain Marvel reveals it all!
Marvel Studios’ presents “Captain Marvel,”  is the first stand-alone, female-franchise that introduces Carol Denvers aka Captain marvel into the Marvel Cinematic Universe. The movie is an all-new adventure from a previously unseen period in the history of the Marvel Cinematic Universe.
Acknowledged as Marvel's mightiest Super hero, Captain Marvel is touted to begin 2019 with a bang and is undoubtedly one of the most awaited films of this year. Brie Larson, who has won an Oscar, followed the epic strength training routine in preparation for the role. She even did actual flight training which is was quite intense and despite falling sick, Brie continued to train!
As Captain Marvel: THE MOST POWERFUL SUPERHERO, the Oscar winning actress herself pushed an almost 2500 KG Jeep to get into insane shape for the role!
What's more we hear that Brie is a huge fan of India and Indian food!
When asked during the promotions of Captain MarvelBrie Larson revealed she had travelled to India before and loved the experience, “I loved India. I got to travel a little bit. Kerala has a lot of fish and coconut chutney, so good. And pickle, I can eat a lot of pickle. A lot!  There’s just a lot of colour and brightness and a lot of dancing.”
Marvel Studios’ “Captain Marvel” is produced by Kevin Feige and directed by Anna Boden and Ryan Fleck. Louis D’Esposito, Victoria Alonso, Jonathan Schwartz, Patricia Whitcher and Stan Lee are the executive producers.  Captain Marvel releases on 8th March, in English, Hindi, Tamil and Telugu