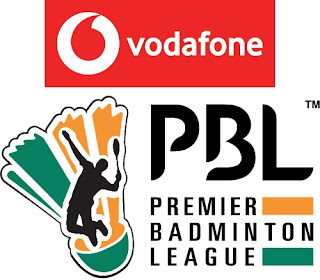 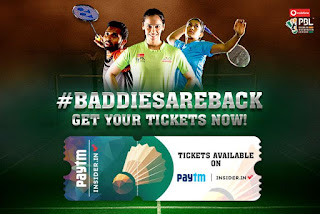 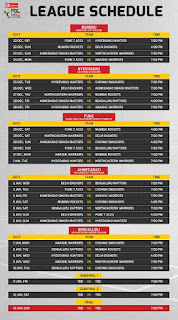 Mumbai :  The badminton fans across the country can now book tickets online through Paytm & its affiliates to watch their choicest matches while routing for their favorite teams during the fourth edition of the Vodafone Premier Badminton League (PBL), which commences from December 22 at Mumbai.
The PBL, organised by Sportzlive under the aegis of Badminton Association of India (BAI), will be using the popular e-commerce platform to reach out to maximum users and at the same time provide value ads to fans for the tickets bought.
“We wanted to give more value to the fans and not just buy tickets of the matches, and association with Paytm platform helps us achieve that goal,” said Atul Pande, Managing Director, SportzLive. “Fans will also get an opportunity to redeem and utilize cashback offers on the tickets they are booking online,” he further added.
This was the first time that the popular e-commerce network owned by Paytm has been brought on board and the ticket sales for the Mumbai-leg has just gone live for the matches that will be played at the Dome of the National Sports Center of India (NSCI) from December 22. “We will go live for other cities by December 15, 2018,” said Pande.
The pricing of tickets has been kept as low as INR 299 for students. The next slab is fixed at INR 499 and then at INR 999. However, the premium tickets are priced at INR 2999 for those who want a classic view of the court-side.
Last year, the premium tickets were only open to corporate. For Season 4, on feedback from fans and keeping the public interest in mind, the League has lowered the prices of premium tickets and has put all Premium seats on sale. PBL has also kept in mind the interests of budding badminton players and fans for the upcoming season while introducing student tickets.
“Based on our feedback and keeping the fan interest in mind, we ensured that all host cities this season have the Premium tickets as well as tickets priced at lesser denominations-so that fans can choose from what they want and also be incentivized with cash back offers. Students, on the contrary, can show their valid College/School identity card along with one photo id card and can also get vouchers while they buy match tickets,” Atul Pande added.
The Paytm along with its affiliates, on their part, is also offering a bonanza for those who are booking their tickets through the wallet. Two PBL match tickets bought at a time through Paytm network channels will ensure the individual a INR 150 worth movie vouchers. Fans also can go for advance signups on which exclusive discounts up to 25 per cent, up to INR 400 cashback are available. All the offers are current offers and the same will be updated in the span of the league.
The tickets will also be available for offline sales from the box office two days prior to the respective matches (T-2) from the outlets at the respective stadium venues in the host cities.
The 23-day event will witness nine teams Delhi Dashers, Ahmadabad Smash Masters, Awadhe Warriors, Bengaluru Raptors, Mumbai Rockets, Hyderabad Hunters, Chennai Smashers, North Eastern Warriors and Pune 7 Aces slug it out for a prize purse of Rs 6 crore in five cities with the inaugural rounds being held in Mumbai (December 22-24), followed by Hyderabad (December 25-28), Pune (December 29-January 1), Ahmadabad (January 2-6) and Bengaluru (January 7-13) will host the semifinals and final of Season 4 too.
You can now purchase Mumbai tickets by clicking on this link: https://insider.in/go/vodafone-premier-badminton-league-2018-19-mumbai

Total Players in the league: 90

Format: Best of 3 Games with 15 Points

The Vodafone Premier Badminton League Season 4, is the one of world’s richest prize money tournament offering a total prize of INR 6 Cr. The league is conducted by SportzLive, licensee partners of PBL and is organised under the aegis of Badminton Association of India (BAI), led by President Dr. Himanta Biswa Sarma. The league kick starts from December 22nd 2018-January 13th 2019 and will see 9 teams; Delhi Dashers, Mumbai Rockets, Hyderabad Hunters, Awadhe Warriors, Chennai Smashers, Bengaluru Raptors, Ahmedabad Smash Masters, North Eastern Warriors and Pune Seven Aces battle out in 5 different cities of India, including Mumbai, Pune, Hyderabad, Ahmedabad and Bengaluru. Matches will be telecast live on Star Sports and live streaming made available on Hotstar.
About Badminton Association of India:

The Badminton Association of India (BAI) is the Governing Body for Badminton in India recognized by Ministry of Sports, Govt. of India as National Sports Federation. BAI is registered under the Societies Act and recognized by Indian Olympic Association (IOA) and internationally affiliated to Badminton Asia Confederation (BAC) and Badminton World Federation (BWF). BAI was formed in 1934 and Badminton Associations of all States / UTs are its Member Associations. BAI organizes National Championships for all categories of Badminton players apart from Zonal, Inter State Championships and All India Ranking Tournaments in India. BAI also conducts various International Tournaments like the India Open World SuperSeries, Syed Modi India Grand Prix, India Junior International Championship along with the ambitious grassroot project, Shuttle Time which aims to reach 1.5 million school children in 21 States in 2018. BAI has also initiated the Coaching the Coaches programmes for creating a pool of Coaches to promote Badminton in India.
About Sportz& Live Entertainment Pvt. Ltd. (Sportzlive) is a Gurgaon based sports management and marketing company set up by experienced industry veterans! It's a venture capital funded company that acquires sports IPRs. It already has an impressive portfolio that includes the Premier Badminton League, Indian Cue League (Snooker + Pool) and several other IPR properties. Sportzlive currently has about 90 days of Live action content as part of its overall vision for the development of the sports ecosystem in the country. They have also set up North India's largest Badminton Academy at Greater Noida in association with Pullela Gopichand.