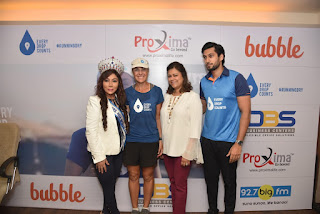 MINA GULI concludes the Indian Marathon at Mumbai
We are using water faster than it is able to be replenished;
#RunningDry Campaign Raises Awareness, Urges Change

Mumbai, December 6, 2018. On the 4th of November at the New York Marathon, international water advocate, Mina Guli, set out on the ambitious individual challenge of running 100 marathons in 100 days to highlight the global water crisis. Having already completed more than 30 of the 100 marathons, through the UK, France, Italy, Uzbekistan and India, Mina has experienced first-hand ‘choke points’ that are feeling the impact of the emerging global water crisis.

Mina’s Indian Marathon started on 23rd November in New Delhi and after running through various parts of Haryana, Rajasthan and Gujrat Mina concluded the Indian leg at the iconic Gateway of India in Mumbai. Mina will head to Hong Kong and China after India.
“My journey so far has allowed me to meet so many incredible people and to see the real effects that water shortages are already having on our world,” says Mina. “For many of us, we don’t have a real concept of where our water comes from. We simply turn on a tap and the water is there. To meet children as young as 3 years old walking more than 2km a day to collect water has given me a real appreciation of just how precious water really is.” 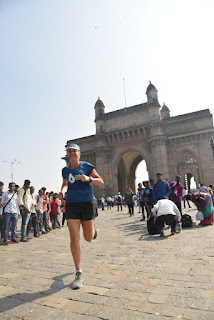 Mina’s passion to change how people think about water and have a world where there is enough water for everyone forever is what keeps her going. She has been meeting with local water heroes within each of the regions she is visiting. These water heroes are people who are devoting their time and energy to making a difference to the global water crisis.
“In the UK, for example, I was joined on one of my runs by Dr Liz Goodwin of the World Resource Institute. Liz ran12.3km with me to represent SDG 12.3 which is the sustainable consumption and production patterns,” says Mina. “I learnt from Liz that if we stopped all food wastage we would be able to save 18% of the world’s water, which is a staggering number if you consider that less than 1% of the earth's water is useable by plants, animals and humans as the rest is "locked" in the oceans, ice caps, glaciers etc. We need to stop living as though everything can be replaced and start placing value on our precious resources.” 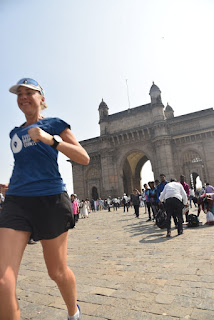 So how is she feeling after 30 marathons in 30 days? “Exhausted!” she laughs, “But inspired.” Mina, a 48-year old Australian who is based in Hong Kong, is no stranger to long runs. The #RunningDry Expedition follows the 2016 7 Deserts campaign and the 6 River Run in 2017, which saw Mina complete the equivalent of 40 marathons in 40 days down six of the world’s great rivers. Mina aims to create a global community of water savers and change the way we use and think about water. People can follow her journey on social media where she’ll be documenting the entire expedition.
“As a society, we hold the power,” says Mina. “With that power we need to encourage companies and governments to make a real change in the way we not only use, but also view our precious and incredibly scarce water supply.” 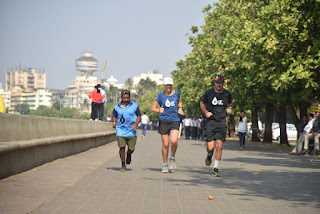 Ms. Vanita Bhandari – Managing Director, DBS Business Centers, expressed her thoughts and said “At DBS we try and take every small step to save water as Water is the most essential element and forms a significant part of all three basic needs for humans - Food, Shelter and Clothing. Infact, the consequences of today’s negligent water consumption pattern is unfortunately going to lead towards 40 per cent of our population having no drinking water by 2030 which could impact India’s GDP by 6 per cent*. And at DBS Business Centres we are happy to be associated with the cause and are glad that we could participate in whichever way possible”
Mr. Aditya Bhandari – Director, DBS Business Centers, who is involved in various CSR activities said, “It’s time for the younger generation to take the command in our own hands and lead the initiative from the front, we are enjoying what our elders saved for us and now we have to do the same for our coming generation, we have to assure the world is a better place for all.”
Mrs. Asia Woman of the Universe - Naavnidhi K Wadhwa expressed her excitement saying “I am feeling really happy and proud on meeting Mina Guli, who is showing the world that if determination is there than even a single person can bring a great change. India is a country where we worship the sources of water and call them mothers because of their contribution for our survival, thus it is our duty to conserve these sources for our future generation.”
Human civilization is facing an unprecedented crisis: a projected 40% shortfall in the availability of fresh water by 2030 under current business-as-usual projections of population and economic growth.
Indian Association
Proxima life is organising the event in India and bubble communication is the official communication partner for the event. BIG FM is the official Radio partner for the event in Mumbai.
To follow Mina’s journey and find out how you can make a real difference in solving our water crisis visit:
Website www.minaguli.com
Facebook @MinaGuliWater
Twitter @MinaGuli
Instagram @minaguli

*Statistics as per NITI Aayog (National Institute for Transforming India).
ABOUT #RunningDry
Mina and #RunningDry are proudly supported by Colgate and Reebok, as well as the UNESCO World Water Assessment Programme. Other supporting organizations include the Global Water Partnership and the UN Development Programme.
ABOUT MINA GULI
The founder and CEO of Thirst, Mina Guli is a global leader, entrepreneur and adventurer passionate and committed to making a difference in the world. Following a 15-year career as a world leader in climate change that started with law, but progressed quickly to the World Bank and to co-founding boutique investment firm Peony Capital, Mina established Thirst – a non-profit that is solving the water crisis by changing the way we think about water.
To highlight the global water crisis, in 2016 Mina completed the 7 Deserts Run -- running the equivalent of 40 marathons across 7 deserts on 7 continents in 7 weeks. A self-confessed "non-runner", Mina told the stories of some of those affected by the crisis during the run. The success of the expedition encouraged Mina to undertake the 6 River Run in support of the UN’s Sustainable Development Goal 6. She ran 40 marathons in 40 days down 6 of the world’s great rivers on 6 continents. With media coverage around the world, including on CNN, BBC, ITV, ABC and CCTV, Mina’s messages about water have reached more than 4 billion people, inspiring a generation of water heroes.
Mina has been recognised for her leadership: she has been named a Young Global Leader by the World Economic Forum, one of Australia’s most influential women, and by Fortune Magazine in 2016 alongside Angela Merkel, Jeff Bezos, Tim Cook and the Pope as one of the 50 greatest leaders in the world. 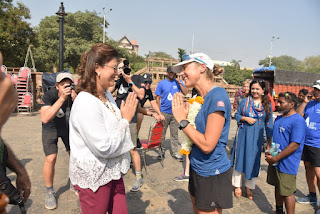 ABOUT THIRST
The #RunningDry campaign is organized by Thirst, an international not-for-profit organization focused on educating and promoting action on and solutions to the water crisis. Since its launch in 2012, Thirst has educated more than 2 million students in China, has had more than 600,000 participants in its innovation competitions and now works with more than 1000 qualified volunteers and has the support of the Chinese Government.
Thirst founder and CEO Mina Guli will undertake the #RunningDry campaign.
By Mission Patrakarita
Share to: