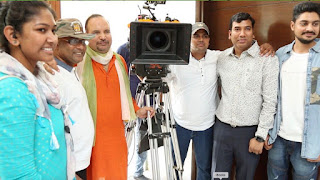 Veteran ad maker Murari Sinha alias Sahil Sinha is debuting himself as a feature film director with a social mythological movie titled "JAI CHHATHI MAA". Murari revealing a unique story of charismatic of Goddess of northern eastern region, Chhath Mata. No film has had the research story of Chhath Puja. The director claims, it's really a different mythological movie of its kind in so many aspects. How and why, he was questioned :

◆ In what respect your film is different and unique ?

--- "It's the first movie which narrates the research story of Chhath Maa. People have watched just her charisma and avatar. This movie is made with modern technology. We shot it on super advanced Ari Alexa camera. We used VFX effect system.

◆ , And what about its commercial values ?

--- Over two and half millions of people know about Chhathi Maa and their families worship Her. But, not because of this cause, my film will definitely hit the box office due to its meaningful, messageful script, tricky photography and tremendous VFX works. Entire mytho portions are modified by VFX effects, which is operated as well as directed by Utkarsh Kumar and Sudhir Chaudhary.

--- Mythology is always safe. Horror and mytho movies have some basic numbers of viewers, they don't miss it. I'm from a holy place (Sultangunj, Bhagalpur, Bihar), that's why I know its importance and am convinced.

The film is being produced under the banner of Shining Screens by Ruchi Gupta and Rajni Ganju, where Nilesh Kumar is executive producer. It lyrics by Arvind Prasad (Aarati) and Amitabh Ranjan, music by Nayan Mani barman, Dushyant kumar and Sanjay Kumar, art work by Varun Kumar, choreography by Sanjeev Sharma , VFX by Utkarsh Kumar and cinematography by Pintu Kumar Dholamiya. It's slated to release in mid October.
By Santosh Sahu
Share to: