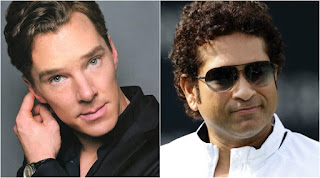 Vivo ILP 2018 saw the amalgamation of Sports and Entertainment when ‘Binga’ Brett Lee met ‘Doctor Strange’, Benedict Cumberbatch on the sidelines of the press tour for ‘Marvel Avengers: Infinity War’ in Singapore.  The special episode, to be aired exclusively on the Star Sports Network, will be a part of Kent Cricket Live as a build up to a ‘Super Sunday’ on 22nd April 2018 at 2:30 PM.
Covering a wide spectrum of topics, the interview conducted by Brett Lee had Benedict Cumberbatch speaking about his favorite cricketers, life as a movie star, sharing screen space with Robert Downey Jr. and Mark Ruffalo and much more.
When quizzed on cricket, Cumberbatch mentioned “Graham Gooch was my hero when growing up. I loved playing cricket and because I was a wicket keeper, I had my eye on Jack Russell.”
Brett Lee also went on to ask about Benedict’s views on who would best fit the role of Doctor Strange to which he replied “Sachin Tendulkar would do quite well in fitting the role as Doctor Strange as he is quite extraordinary”
The interview will be aired on 22nd April 2018 as part of the Super Sunday Broadcast, giving fans of the VIVO IPL an exclusive sneak peek into the life of Benedict Cumberbatch and some exclusive ‘behind the scenes’ information for the upcoming Marvel Avengers: Infinity War movie only on the Star Sports Network as a special broadcast for all Indian fans.
Marvel Studios’ Avengers: Infinity War is set to release in India on the 27th of April 2018 in English, Hindi, Tamil and Telegu, in 2D, 3D and IMAX 3D formats.
By Santosh Sahu
Share to: